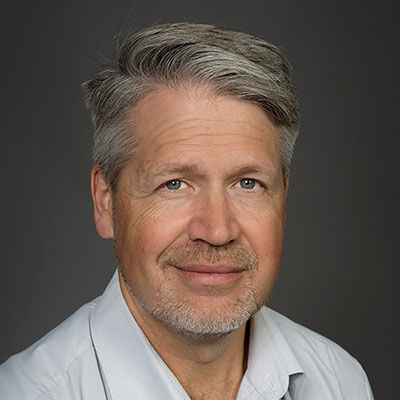 Ian became interested in optometry when he himself needed glasses to see the blackboard clearly at school as a 12 year old.﻿

He studied optometry at the University of Melbourne, graduating at the end of 1989.

He returned to study in 2008 to gain an extra qualification in therapeutics – enabling him to prescribe a range of therapeutic medicines to treat ocular disease.

Travel has played a big role in Ian’s life. He took most of 2000 and 2001 off to backpack around the USA, Europe and Africa with his wife. In 2014 he again took a hiatus from work to travel around Australia – this time with his wife and their 3 children. He looks forward to heading overseas for a new adventure whenever the post-pandemic world allows!

Ian has now been an optometrist for over 30 years. He loves to assist people with their visual problems and really enjoys treating ocular injuries, diseases and removing foreign bodies. He loves an optical challenge and likes to solve complex problems by thinking “outside the square”. Use of the latest gadget and diagnostic technology to make his patients’ lives better is a passion for Ian.

“I want to solve your problem and will work hard to help – no matter how simple or complex the issue is. Communication and thorough explanation are what I consider vital to me fulfilling my role as your go-to eye care professional ”

Outside of work Ian will continue to play cricket until somebody (or HIS body) makes him stop. He is also a keen recreational cyclist. In 2021/22 he will have 2 children doing VCE simultaneously - wish him luck!

Eating out with his wife and friends is something he enjoys immensely. He also closely follows the extensive sporting and work endeavours of his 3 teenage children.